Basically everyone is familiar with the three most famous states of matter: solid, liquid, and gas. However plasma the fourth state of matter is unfamiliar to most people. When asked what plasma is most people think about the plasma in blood which is the liquid that transports nutrients throughout the human body. Less people will think about the plasma that is generated in the northern- and southern lights, lighting and the ionized balls of plasma that make up the sun and stars that light up our sky.

This type of plasma does not freely exist on Earth’s surface but can be artificially generated by heating or subjecting a neutral gas to a strong electromagnetic field. The collection of particles behaves collectively due to attractive and repelling forces and is both positively and negatively charged. The generated plasma is electrically neutrial medium that can generate an electric current with a magnetic field, the more energy the particles have the higher the velocity of particles and the temperature of the system. 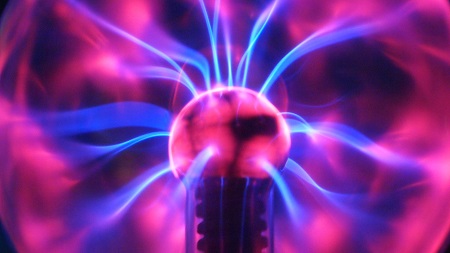 “Plasma: the fourth unfamiliar but astonishing type of matter.“

The most common plasma used on Earth however is a cold, low temperature plasma that is used in neon signs, fluorescent lamps, and plasma displays. When an electrical current is passed trough a mercury or neon vapour in a fluorescent lightbulb it heats up the gasses to a point where the electrons are stripped from the gas to create plasma. During this process the gases in the lightbulb are ionized and the plasma insides lights up. Plasma screens are made of thousands of pixels which are made of fluorescent light electrodes containing electrically charged ionized gases in the colours red, green and blue which can generate any colour together.

Lightning strikes are a natural plasma which can be simulated with the following technique:

Other familiar examples instruments plasma technology is used for are:

Plasma taking us to outer space

The example that plays most to the imagination and worth taking a deeper look at is the power of rocket exhausts. During take-off a rocket is powered on powerful chemical rockets that burn a lot of repellent to overcome gravity during take-off. However when the rocket arrives in the orbit around Earth plasma rockets are used to power the rocket. The ionized gas will be expand into space creating a force in the opposite direction driving the rocket through space. These rockets are very fuel efficient using only 80 kilograms of gas when travelling from the Earth orbit to the Moon orbit which is comparable to one tank of gas for your car. To further decrease the fuel consumption the plasma can be accelerated before it leaves the rocket increasing the power even futher this would allow for a round trip to Mars in less than year instead of the many years it would take with traditional chemical rockets. Research to achieve this objective is being conducted and our instruments are a valuable addition to achieve this objective.

Mass Flow ONLINE offers MASS-VIEW Meters, Controllers and Regulators that ensure a high quality result. The MASS-VIEW allows for direct measurements, regulation and control over the process with a high accuracy and rangeability that is clearly displayed on its OLED display.